Everybody at CPTPC would like to congratulate the Liverpool SFA under 14 girls team following their 2-0 victory over Medway SFA in the ESFA U14 District Girls’ Champions’ Cup Final on Saturday the 25th June 2022.

The final was held at the Sixways Stadium in Worcester and the team, sponsored by Care Plus Transitions and Transitional Plus Care, produced a thrilling and highly exiting performance under the management of Anthony Corcoran and his assistant, Daniel Ellis. CPTPC’s Managing Director, Mark Brown, and Head of Service, Jeff Hay were both in attendance alongside other members of staff to witness the victory and personally congratulate and thank the team for an outstanding performance.

Well done ladies and let’s hope for more success and awards in the future! 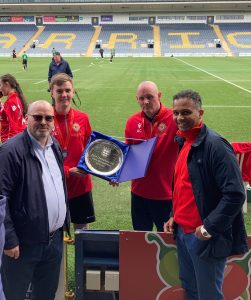